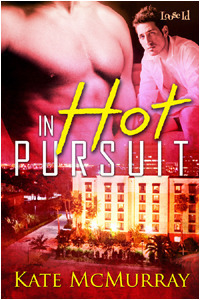 Hard-working NYPD cop Noah Tobin didn't even want to go on vacation. But it's been a tough eighteen months since the death of his lover, so he's determined to make the most of it. On his first night in sunny Florida, a chance encounter with a handsome man in a bar bathroom jumpstarts something in Noah that's been dormant for all those months. Then the man disappears.

Noah's vacation is thrown into upheaval because he can't just let it go when he learns that the mysterious man who turned his life upside down went missing. He volunteers to help with the manhunt for his mystery man, a wealthy restaurateur named Harrison Knowles. But finding Harry is only the beginning of Noah's hot pursuit.

After I ate, I got a cab into downtown St. Petersburg and had the cabbie drop me off a few blocks from a place called Shanley’s, which, according to the travel guide, was a well-established gay bar with a mellow atmosphere. That sounded about my speed. I knew I couldn’t handle dancing and Europop, but mellow I could do. I figured I’d go in, sit at the bar, have a beer, and observe the wildlife.