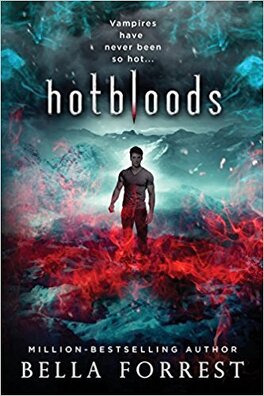 One last adventure. That's all Riley wants before heading off to college and parting ways with her two best friends. Spending their last summer together on a Texas farm in the middle of nowhere isn't quite as exciting as they'd planned...

That is, until they stumble upon secrets no human should know.

Men who appear and disappear.

A giant wing hidden in the creek.

Screams in the dead of night.

Every oddity seems connected to their strange--and alarmingly attractive--new neighbors, led by the stormy-eyed Navan. For reasons she can't explain, Riley feels drawn to him and the story of his past.

But Navan has a monstrous side, one that grants him incredible powers that are not of this world...and ashen skin that feels like fire to the touch.

When events take a dangerous twist, Riley is determined to protect her friends at all costs, but as she unravels each thread of the mystery, she finds herself entangled in a supernatural conquest that is far bigger than Texas... and even Earth itself.

And a journey that could change the fate of the human race.

Prepare for a unique spin on the lore you love - and an adventure that is as thrilling as it is unexpected.

“Remind me which genius suggested we put this off till midday?” My friend Angie’s muffled voice drifted through the stalks of corn to my right.

“I believe the same one who didn’t pack enough water,” my second companion, Lauren—also obscured by giant shafts of corn—replied, from five feet to my left. Her naturally dry tone sounded more sarcastic than usual, probably because, thanks to Angie, we’d run out of water half an hour ago.

I smirked, taking a few seconds’ pause from picking corn to wipe sweat from my forehead with the back of my wrist. Despite wearing a shirt and shorts made of cotton so light it was almost see-through and a wide straw sombrero, and religiously sticking to the shade of the corn stalks, this Texan sun was killing me. Still, I loved this kind of work, using my hands— it was cathartic—so I wasn’t going to complain.

“Also the same one who suggested we spend our vacation on this delightful farm,” Lauren added with a grunt. I pictured her tall, lanky form hunched over as she tackled a far too unripe cob, while her narrow, purple, librarian-style glasses glided slowly but surely down her nose. She was not so much a fan of manual work.

“Oh, come on, Lauree.” I couldn’t resist teasing her, despite my resolution to save my voice for after we’d returned to the farmhouse and I’d downed a liter of water. “We know you love it here.”

“‘Course she does,” Angie proclaimed, and I could hear her broad grin through her voice. “What’s not to love?”

“Guess you have a point.” Amid her heavy breathing, Lauren managed to force a note of thoughtfulness into her voice. “I mean, aside from the fact that we’re off the grid, with no electricity or phone signal for literally miles—who wouldn’t appreciate a welcome package of a heap of moldy towels, a sprinkle of roach droppings on their pillowcase, or… a snake in their toilet pot?”

Angie and I burst out laughing. From the tremor in Lauren’s voice, I could tell she still hadn’t gotten over last night’s surprise. Trust Lauren to get dibs on the snake.

“It was a grass snake,” Angie retorted, “and a pretty cute one at that.”

A span of amused silence fell between us as we returned to filling our sacks. This was the second of three assignments we had to complete today; the first had been running bed linens through a manual laundry machine, draining them through a ringer, and then hanging them up to dry outside, and the third would be picking fresh herbs from the greenhouse. Mr. and Mrs. Churnley, friends of Angie’s grandparents and the owners and sole full-time residents of Elmcreek Farm, were to assign us three such jobs every day, in return for free board and lodging.

We had arrived only yesterday evening, having flown from New York to Austin, but I was already feeling a sense of calm about the place. Being without electricity, internet, or a working phone was a culture shock we were all still getting used to, but the lack of external distractions was exactly why we had chosen to come here.

This summer was the last chance Angie, Lauren, and I would have to spend quality time together for possibly a very long time, because after the vacation ended, we’d all be heading off in vastly different directions—Angie even to a different country. I was enrolled to begin a mechanical engineering course in Michigan, and Lauren was to study pre-law at Stanford, while Angie would be jetting off to Paris for an apprenticeship at a prestigious sports-fashion brand (thus combining her two biggest passions). If things worked out for Angie there, we’d see very little of her indeed.

She and I had known each other since kindergarten, while Lauren had known us since first grade, so we decided we needed to do something special, and completely different, this summer—something we’d never forget.

I also had a more personal reason for wanting to be in the middle of nowhere this particular vacation… unreachable. Before I left for Michigan, I knew my birth parents were going to try to get in touch—something I dreaded from the very core of me. My adoptive parents, Jean and Roger, could only hold them off for so long now that I’d turned eighteen, and the court legislation no longer had the same hold that it did during my earlier teen years.