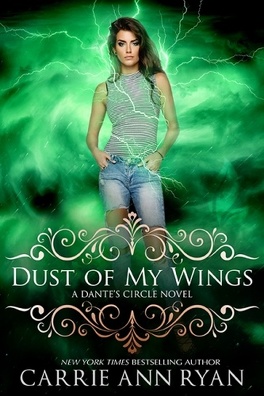 Humans aren’t as alone as they choose to believe. Every human possesses a trait of supernatural that lays dormant within their genetic make-up. Centuries of diluting and breeding have allowed humans to think they are alone and untouched by magic. But what happens when something changes?

Neat freak lab tech, Lily Banner lives her life as any ordinary human. She’s dedicated to her work and loves to hang out with her friends at Dante’s Circle, their local bar. When she discovers a strange blue dust at work she meets a handsome stranger holding secrets – and maybe her heart. But after a close call with a thunderstorm, she may not be as ordinary as she thinks.

Shade Griffin is a warrior angel sent to Earth to protect the supernaturals’ secrets. One problem, he can’t stop leaving dust in odd places around town. Now he has to find every ounce of his dust and keep the presence of the supernatural a secret. But after a close encounter with a sexy lab tech and a lightning quick connection, his millennia old loyalties may shift and he could lose more than just his wings in the chaos.

Warning: Contains a sexy angel with a choice to make and a green-eyed lab tech who dreams of a dark-winged stranger. Oh yeah, and a shocking spark that’s sure to leave them begging for more.