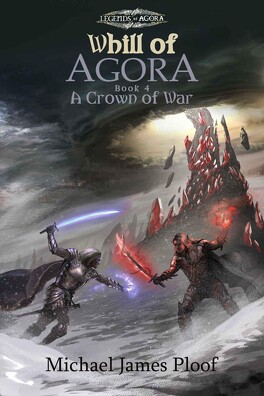 A Crown of War, the conclusion to the Amazon best-selling fantasy series, Whill of Agora. Eadon’s dark armies have descended upon Agora. Rifts within the kingdoms of humans, dwarves, and elves, have unleashed hordes of draggard and dark elves. Although The Other has destroyed the rifts, Whill and his friends are now trapped far across the ocean in Drindellia. Whill must find a way to overcome his alter ego, and ultimately, the Dark Elf Eadon. The ancient elf Kellallea claims that Whill need only hand over the power of Adromida to her, and Agora shall know peace. He has successfully united the races against the dark elves, but is it too late? Dirk Blackthorn has finally been reunited with his long lost Krentz, they are free of Eadon once and for all, free to live the life they choose. Dirk urges that they go far away from Agora, believing that Eadon will succeed. Krentz, however, has set her sights on thwarting her father’s plans. Roakore is far from his mountain kingdom of Ro’Sar, a kingdom he believes is in dire peril. As he and his companions fight to find a way back to Agora, Roakore struggles with the doubts planted by the Book of Ky’Dren. Soon he will discover something of such magnitude that it will change his life forever. Aurora Snowfell stands upon the brink. Torn by loyalty and the promise of power, she must choose between the future of her people and her very soul.