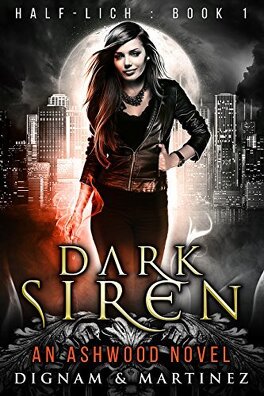 A nightmarish realm. A city of monsters. One girl’s soul caught in the middle. Supernatural bounty hunter Alice Werner loves her job. She gets paid the big bucks to take down her targets and doesn’t ask her clients too many questions as long as the money’s good. But when a girl goes missing and the case feels all too familiar, Alice can’t help but act. Concern for the girl’s safety draws her into a risky case. Compassion keeps her involved when the stakes begin to rise. Desperation forces her to call on an old flame for help. Despite their unfinished past, Alice and Isaac Moreau, a prominent Mage, must work together to save the girl. When clues reveal more than meets the eye, Alice must face her deepest fears and confront demons from her past to protect the victim, and herself, from a fate worse than death. Dark Siren is the first book of the Half-Lich Urban Fantasy series, a collection of tales set in the grim, unforgiving metropolis of Ashwood. If you like mysterious supernatural creatures, fast-paced suspense, and conflict-ridden romance, then you’ll love Dignam and Martinez’ otherworldly series starter which early reviewers are comparing to works by Patricia Briggs, Ilona Andrews and Ella Summers! Buy Dark Siren and dive into the city of Ashwood today!

On a windy night in October, long after the last patrons of the Cinema Royale had shuffled out of its font doors for the last time, something happened to Emily Page with would change the trajectory of her existence forever.

Maggie Davenport, owner and manager of the Cinema Royal, had taken of as soon as the end credits to The Big Sleep rolled. Freddie, her son and the Royale's line manager, followed like a babe, closely and obediently, leaving Emily and the only other working employee - Nathan Wyatt - to clean up and close the theatre.

This wasn't a particularly odd thing to happen, that the car of the entire theater should be left to two employees. There was no love left for this place, no love for the old girl, as Bogart might have said. This much Emily had been sure of for a while. The theater had been going downhill for as long as she had been in tis employ, manning the ticket booth and lending a hand to clean up when the once-grand doors closed for the night. Someone was always off sick or had to babysit, and the theater didn't have much in the way of employees to begin with. There hadn't been a full crew in over twenty years.

It didn't help that moviegoers on this side of the town were, at the best of times, as messy as over privileged children with way too many toys. At the worst fo time, Emily had found things in the space between rows she wouldn't touch with a dead man's hand. Tonight, however, the theater was spotless. Everyone, it seemed, had taken a moment and gone slightly out of their way after the movie ended to throw their garbage in the thrash, like mourners at a funeral dropping flowers on top of a casket.

"Lost something in there?" Nate asked.

"Look at this, Nate," she said, tilting the waste basket toward him.

"Isn't that where trash usually goes?"

"In a normal movie theater, sure, but it's like the people who come here don't know how to tidy."

"Not tonight," he said, scratching his chin in agreement. "Maybe they're paying respects?"