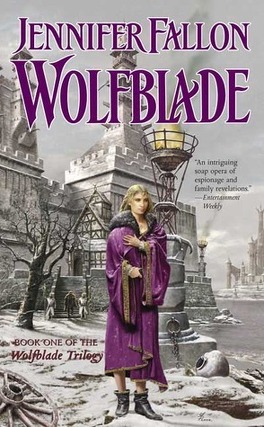 The first book of Fallon's new trilogy showcases the Australian writer's skill at dramatizing the convoluted schemes and backstabbing of king making and power politics. Though not yet 16, Lady Marla Wolfblade, sister to Lernen, the High Prince of Hythria, is a valuable piece in a vast political chess game. Marla's upcoming wedding to King Hablet of Fardohnya will give Lernen access to Hablet's armies, in case of attack from neighboring Medalon; they'll also come in handy to make the Warlords of Hythria toe the line and to withstand attacks from members of the Hythrian "Patriot" faction disgusted by Lernen's hedonistic lifestyle. Fortunately, Marla finds a helpful adviser in the clever dwarf Elezaar, whose former lord was assassinated by Patriots. With his help, Marla grows from a mere pawn to one of the most powerful women in Hythria. Fallon sets the stage for another lively fantasy saga full of intriguing characters, smart dialogue and twisty plotting. (Jan.)

The greatest value of Marla Wolfblade, Hythria's beautiful, 15-year-old princess, lies in the political marriage her brother, High Prince Lernen, can make for her and the heirs to the throne she may produce. Unfortunately for the House of Wolfblade, Lernen, interested only in perverse pleasures, cares nothing about ruling. Kagan, Lernen's personal sorcerer, actually runs things and is doing his level best to keep Lernen from being murdered and thereby opening the throne to Bernardo, who may be even stupider than Lernen is disinterested. In Hythria, it's every man for himself, every family for itself, though even brothers are wise not to trust one another. It's a world, too, in which only men may have power. But with the help of a politically savvy dwarf, Marla navigates dangerous territory to keep the sons she does produce alive long enough to inherit the throne and restore the House of Wolfblade's honor. With enough backstabbing, high intrigue, plot twists, and timely visits from the gods to make it very hard to put down. Paula Luedtke