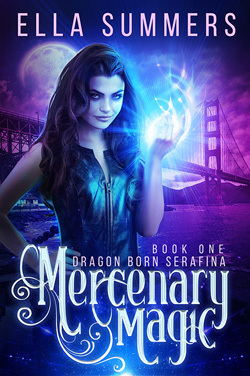 Long ago, the Dragon Born were hailed as the most powerful mages in the world. Today, they are condemned as abominations and have been hunted to near extinction.

Sera Dering has spent her entire life hiding her forbidden magic from the supernatural council who would kill her for the crime of being born. After years of drifting, she’s finally found a new life working as a low-grade mercenary for San Francisco’s oldest monster cleanup guild. She’s safe—as long as she pretends to be human.

But a dark and mysterious power is taking control of mages’ minds, and Sera’s guild sends her in to investigate. To save her city from a magical apocalypse, she must work together with a sexy and deadly mage who represents the very council that sentenced the Dragon Born to death. And if he finds out what she is, she’ll be next…

BATTERY SPENCER WAS widely considered the best spot to snap shots of the Golden Gate Bridge. Every day, visitors to the ruins of the former military fort braved bone-chilling wind and fog for a spectacular panoramic view of one of San Francisco’s wonders. Today, they were braving the twirling cyclones summoned forth by a psychotic mage with melodramatic tendencies.

Well, perhaps ‘braving’ wasn’t the right word. The crowd stood at the edge of the fort, their cameras pressed against the chain-link fence that separated the ruins from the neighboring plot owned by Magical Research Laboratories. The foolish voyeurs clicked away with insatiable glee, their interest in the bridge temporarily discarded in favor of more exciting entertainment.

Exciting for them. Not for Sera, who didn’t exactly consider being slapped against concrete walls fun times. Everyone thought Mayhem, San Francisco’s oldest monster cleanup guild, attracted nothing but sadists and adrenaline junkies. In reality, it attracted mercenaries who preferred to eat every day, have working electricity, and keep a roof over their head: all those little delights that came with a steady paycheck. Fortunately—or unfortunately, depending on who you asked—there was no shortage of magical miscreants in the city.

This particular miscreant shot a blast of wind at Sera. She rolled to the side, avoiding it—barely. Her teeth chattered as the arctic gust whipped past her shoulder and jiggled the metal fence. It was never really warm up here at the battery, but this was outright ridiculous. The mage was drawing on the wind, channeling it into his own attacks. Which meant he’d be able to keep going for awhile. Awesome.

“We need to get past those cyclones,” Sera told Naomi.

Sera’s sometimes-partner looked out across the parking lot of twirling mini-tornados that separated them from the mad mage, her short platinum hair buzzing in the wind. “Yeah. Good idea.” There was no humor in her eyes.