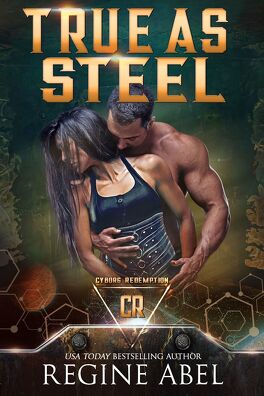 His need to be with her defied logic.

Yesterday, Jarog Kaijo was a Major in the Cyborg Military Elite of Kirs. Today, he is condemned to a life sentence for rebellion. When a series of explosions rock the transport ship taking him to the prison colony, it’s a race for survival to any means of escape. In the process, he irrationally rescues an injured female he doesn’t even know. Her fierceness as their vessel collapses all around them catches his eye. But her loyalty, strength, and determination during their journey awaken in him feelings he hasn’t experienced in the six years since his transformation.

Stranded on a mercenary planet with a powerful, but emotionally closed-off Cyborg, Tamryn’s world is completely turned upside down. With both their faces branded as rebels and bounty hunters on their trail, she must silence her mistrust of Jarog and join forces with him to reach her contact on the planet—the mercenary cartel leader of Satos. Along the way, the tormented soul Tamryn discovers beneath the Cyborg’s controlled façade stirs her in an unexpected fashion.

When presented with a chance at redemption off-world with other Cyborgs, Jarog is torn by his growing feelings for Tamryn. How can he leave her behind when escalating violence in the region threatens the one woman who reawakened the man in the machine?