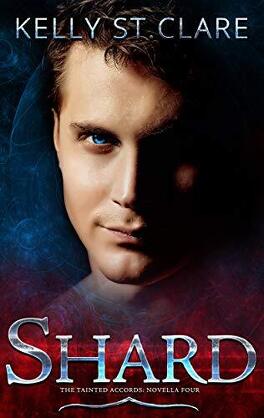 He watches her from the shadows.

With the people of the tri-worlds converging for the first Interworld Games, Shard plans to watch from the sidelines as he protects Glacium’s royal family.

But when the woman he has pursued for over a year urges him to enter the games, he must drop everything or risk losing it all.

Now, Shard's head and heart are competing for first place. Uncertainty digs at the cracks in his battle-hardened armor. Duty and friendship struggle under mounting pressure.

The cool and calm manner he prides himself on is about to explode. . . .

Shard sat beside the queen—formerly Frost, formerly Willow, formerly a lot of things—as he listened to Roscoe rattle off the order of proceedings for the Interworld Games. “The fighters and courts from the Ire and Osolis are arriving as we speak, along with their allotted audience members. The welcome ceremony takes place tonight, with a day for the fighters to rest before the first matches take place in the Dome.” Lina’s baby gurgled, kicking for all it was worth. On cue, all the advisors in the room turned to stare at the queen and, more specifically, the wriggling six-month-old bundle in her arms. “She’s hungry?” King Jovan asked, leaning over from his seat to stroke his infant daughter’s cheek. The queen smiled at him. “Kendra is always hungry.” The men in the chamber chortled, and Shard did the same for a different reason. The birth of the princess had rendered the entire castle and maybe the entirety of Glacium into a gooey mess. Partially because she was named after Kedrick and partially because she was the perfect mix of her parents, whom the people adored. Shard had an inkling Kendra’s thigh rolls had something to do with why he’d turned into a cooing version of his prior self. Why were babies’ thigh rolls so cute? He blinked and leaned back, clearing his throat. The fierce longing that filled him at the sight of Kendra, Lina, and Jovan was beginning to make him maudlin. Truth was he wanted a child of his own. More than one. As many as his future wife would give him. He even knew who the mother would be. Except for the last year and a half, she’d shown no sign of returning his blatant regard. She was great at showing everyone else affection—and then some. He’d tried to be patient—knowing the pressures and expectations of her family—but Shard was at his wit’s end. Was she not attracted to him? He was shorter than the average Bruma male. Did that put her off? Was his position as advisor to the king and queen not good enough? Probably not. For a year and a half he’d believed her hesitation to be born of fear and the effect of her social grooming. Now, after eighteen months on the receiving end of teasing and torture, doubt was taking the forefront. In twenty-seven years, he’d never loved another. From the first time he saw her, Shard felt the shift within him. He knew, irrevocably, that he’d found the partner of his life. “I can hear you thinking from here,” Lina said in a low voice. She freed one of her breasts from her wrap-around maternity tunic to quiet her kicking babe, whose gurgles had turned to demanding squawks.